As promised, I have done some research!

(Incorrect research though… – view Not a Fowler Dock Tank! for more detail)

This train is the LMS Engine No.68478, commonly known as a Fowler Dock Tank, used to shunt in docks, designed to go around tight curves. Only ten were built, between 1928 & 1929. They were all decommissioned and scrapped between 1959 & 1964, which is sad because none were preserved in museums.  Although it fits in the time period, it doesn’t fit with the inland setting of the model. Aidan spends hours (weeks/months) designing – this is a diagram of part of his plane (the current project). 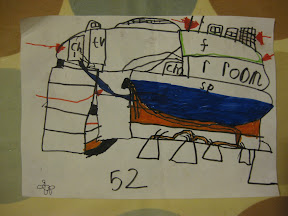 Megan’s favourite thing to draw is a house.